Trendline with weighed average percentage from other dataset in SRSS 2008

By the way for those who don’t know what a weighted average means. Imagine you have 2 agents:
Agent 1, 2000 calls, 2% fail
Agent 2, 10 calls, 40% fail
You cannot simply add 2% and 40% and divide it by 2 (21%). The 2% failed calls of agent 1 weighs much more than the 40% failed calls of agent 2 which only did 10 calls. So to get a weighed percentage you have to add the number of total calls and the number of total fails and get a percentage of that. In this example the failed call percentage would be 2.189055%. Dataset 2 calculates the weighed percentage.

So after some trial and error I found a way to accomplish this in SRSS 2008. There are 2 datasets which output the following data:

Let’s presume there are 50 agents in database. Dataset 2 returns the average of all these 50 Agents.
Now we create a (line) chart (% of failed calls is called Hangup in this example): 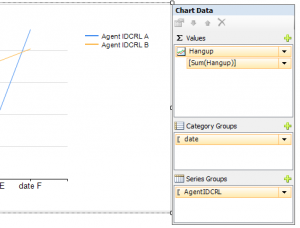 Now to add a line which represents the average value from Dataset do the following:
– Click the + button next to Values
– Choose expression
– Type the following: =Sum(Fields!Hangup.Value, “Dataset2”)
– Click OK 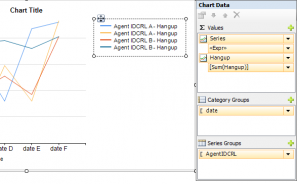 So one thing has to be done:
– Right click the new created series and choose series properties
– Choose visibility and choose “Show or hide based on an expression”
– Use the following expression: =IIF(RowNumber(Nothing) = 1, False, True)
– Click ok and go to “Legend”. Here you can enter a custom legend text like “Avarage % of failed calls”
– Click ok and you’re finished!